What to see in Málaga. Belen museum in Mollina.

What to see in Málaga. Belen museum in Mollina.

We are now enjoying Christmas time, and one of the traditions present in almost all spanish and andalusian homes is the nativity scene that we call “Belén”. This tradition, despite its baroque appearance, could be mistakenly associated with the seventeenth or eighteenth century, however its origin dates from the thirteenth century. If you are thinking about what to see in Málaga during your stay in December, you may see some of this “belenes” on your way.

It is considered that the first representation of the birth of Christ was made by St. Francis of Assisi in the year 1223. It happened near the hermitage of Greccio. As a result, his gesture became popular, and belenes spread in Europe around the S.XV century. Some experts have seen in the “belen” figures a continuation of the Roman “lares”, domestic gods that guarded the home, that lived in the “larario”. The first factory of Nativity scenes of Spain was built in Alcorcón around the year 1471.

BELENES IN ANDALUCÍA AND MÁLAGA

Nowadays, the “belen” tradition is widely spread in Spain, with a very important school and tradition in Catalonia. But if you are asking yourself what to see in Málaga, Granada, Córdoba, Seville and other Andalusian capitals you must visit their Nativity scene competitions and Christmas figures markets at Christmas. Specially if you make your stay and do not know what to see in Malaga, the obligatory stop is in the Paseo del Parque where the stalls and kiosks with figures and scenography elements, in addition to some food stalls that also occupy all this space. But if you want to see more, you should go to Mollina, a few kilometers away from Malaga. 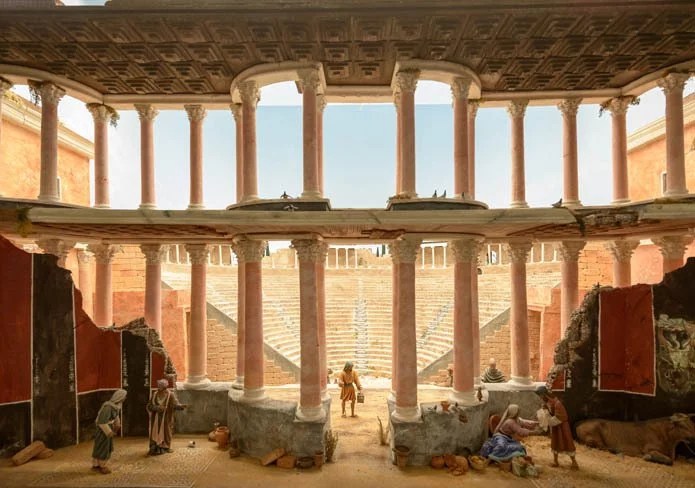 Without a doubt, the question of what to see in Málaga takes on a new dimension when you consider this museum in the already great museum offer of the capital of Costa del Sol. The Belen Museum of Mollina opened in 2017, in this town near to Antequera. It houses a gigantic collection that makes it the largest Belen museum in Europe. The building has more than 5000 square meters and 1000 figures, including a huge Neapolitan nativity scene or even a reproduction of the Alhambra’s lions courtyard.

From Masquetours we recommend you to see in Malaga at Christmas season. We wish you the best for these days and a happy new year!